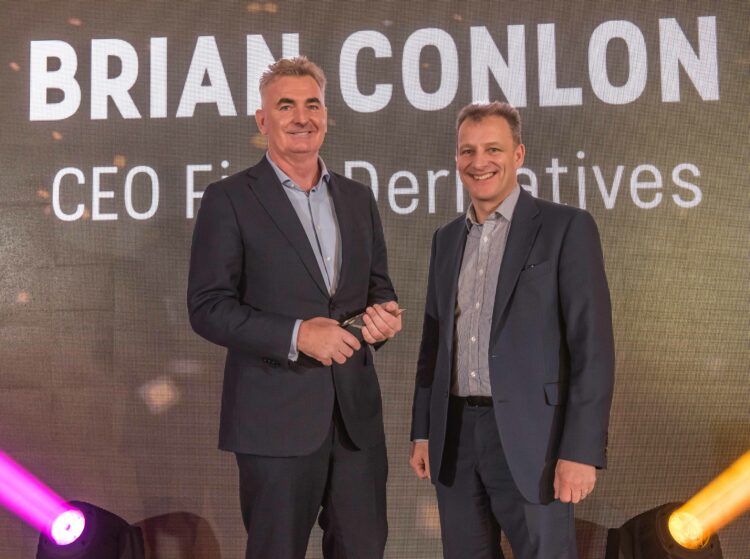 Brian Conlon, the man behind one of Northern Ireland’s most successful tech companies First Derivatives plc, was honoured with the Global Recognition Award at the Digital DNA Awards held last week.

One of the most prestigious awards on the night, it recognises a personality from the Northern Ireland tech community who has had a big impact on the sector across the world.

The recipient of the award is influenced by Digital DNA’s global network who feedback on the impact key individuals from Northern Ireland are having globally. Mr Conlon richly deserves the title for being the driving force behind First Derivatives which has grown to become a world leader in providing products and consulting services for global financial institutions.  From establishing the company in 1996, building up a client roster which includes some of the biggest blue-chip financial institutions in the world, to floating the business on the London Stock Exchange, he has created a global name for the Northern Ireland company.

“Digital DNA has always promoted innovation and disruption, key values shared with First Derivatives. I am honoured to be recognised by a community that supports technology and business growth across Ireland and beyond.”

“There are few people in Northern Ireland who have done more to bolster the reputation of Northern Ireland’s tech community than Brian Conlon. The fact First Derivatives has remained headquartered in Newry in the wake of such stellar growth shows huge commitment to Northern Ireland and communicates a great message to the world about the depth on talent on these shores.

“Congratulations to Brian and all the team at First Derivatives. The award is richly deserved.”

The Digital DNA Awards was held in St Anne’s Cathedral for the second year running in 2018, rewarding Northern Ireland’s top tech talent for their achievements.

The Digital DNA Awards recognise the achievements of the individuals, projects and companies in the Northern Ireland business, technology and IT sectors.

Meanwhile, Patrick McAliskey from Novosco, a Belfast IT managed service company, took the title of Business Personality of the Year while Aaron Gibson, the founder of mobile app Hurree, has been been named Young Person of the Year.

A full list of award winners can be found here: https://www.digitaldna.org.uk/awards/