How to convince your boss you need to attend Digital DNA

In recent years, Northern Ireland’s tech scene has seen significant growth and success . And for many the region is now being recognised as the hub for innovation, especially in sectors such as Fintech, Cybersecurity and Healthtech and more. There certainly is no sign of the tech landscape in Northern Ireland slowing down.

Our very own CEO, Simion Bailie wanted to explore what’s driving the growth in the tech scene and what has changed over the years, particularly in the North West Corner of Northern Ireland, Derry/Londonderry “the second largest city slowly making itself out as a leading tech friendly city”.

And who better to discuss this with than Mary Mckenna. Mary is technology entrepreneur and angel investor, who returned to the city in 2004. Mary  also co-founded online learning company Learning Pool in 2006, she also helps start and grow Irish & British tech companies and especially in working with young and female entrepreneurs.

Read more from Mary, as she gives an insight into the tech scene in Derry/Londonderry.

Derry/Londonderry/Maiden City/Stroke City. Whatever you call it, the second largest city at the North West corner of Northern Ireland is slowly marking itself out as a leading tech friendly city, not just here but across Ireland and further afield. Of course, it’s not the first time that Derry has been a leader in certain industries.

As far back as the 1800’s, the city was renowned as a global leader in shirt manufacturing, with the factory systems developed in the city admired around the world. At its peak, the industry employed some 18,000 people and the impact can still be seen in the city with many old shirt factories now home to trendy new offices.

In the 1950’s, Du Pont had set up its first European Production facilities in Maydown, manufacturing products such as Neoprene, Lycra and Kevlar. The factory is still going today, making it one of Northern Ireland’s longest foreign employers.

By the early 1990’s, Derry began to see an influx in foreign investment. Most notably is perhaps Seagate Technology, a world leader in data storage and management solutions. The site first opened in 1994 and now employs 1500 people at its hi-tech manufacturing facility in Springtown.

The 1990’s is probably when the tech industry as we know it was born in Derry. The influx of foreign companies led local entrepreneurs to look at the city as a viable option to start and grow an indigenous tech company. One such entrepreneur who returned to the City in 2004 was Mary McKenna.

“The local “tech scene” back then was dominated by the prominent FDIs Seagate & Allstate (or Northbrook as it was then known), big fish Singularity (bought out by Kofax in 2011) and a never-ending raft of call centres and it was populated by revered avuncular middle-aged men like Bro McFerran and Alan McClure.  Anyone calling the HP or Expedia help lines back in the day would’ve been greeted by a Derry accent, way before it was trendy.”

“I began working in Derry in 2004.  I moved from Belfast where I’d been global CFO in one of QUB’s semiconductor IP spinouts.  I’d spent a good bit of my time in the early noughties in Silicon Valley and Derry in 2004 couldn’t have been further from San Jose.  The only similarity was that the streets were completely deserted by 5.30pm.  I remember trying to recruit a team at that time and talent was very thin on the ground.  Most of the local workforce were lifers in one of the FDIs or they commuted to tech jobs in either Belfast or Letterkenny.”

Mary started Learning Pool back in 2006 and cites the readily available talent graduating from Magee as a major factor for choosing Derry. “We were bootstrapping and couldn’t afford to hire an experienced team, so we recruited new graduates with the right attitude and trained them.”

Today the city is home to a vibrant ecosystem of energetic start-ups, working alongside large US firms. There’s a stable of promising scaling tech companies choosing to base themselves in the Maiden City.  Established companies like Elemental Software (made the Top 10 in Tech Nation’s Rising Stars 3.0 last month) and Foods Connected (No 5 on the Deloitte Fast 50 across Ireland in 2020).  Newer entrants like MedTech company Respiratory Analytics (just raised a pre-seed from an interesting group of investors and have an eye firmly on the US market), cyber security company ITUS and CareTech challenger start-up InCharge.  Many of these keep one foot in Derry and the other in Donegal, thus preserving their EU status for access to customers and funding.

In recent years, Derry has experienced something of a renaissance.

Catalyst Inc opened its doors on the historical Fort George site just outside the city in 2014, a great formal addition to the fabric of the local ecosystem. Other active start-up supports like Startacus and new female founder community AwakenHub are now anchored in Derry as well.

The announcement of a City Deal for Derry further solidifies the Cities tech credentials. The deal will see the opening of a Centre for Industry Digitalisation, Robotics & Automation (CIDRA) at Magee and a council backed SMART city project that will place Derry firmly at the forefront of the fourth industrial revolution.

“Today the local tech scene is younger, more female, less formal, more global, well-educated and informed and definitely ambitious.  Catalyst’s Co-Founders programme has uncovered some interesting nascent companies.  Some of those new graduates that I recruited back in 2006 or 2007 have gone on to found their own start-ups.  That’s how ecosystems work.”

The overseas investments have helped ignite the tech scene in Derry and whilst Mary agrees that they are less dominant today than perhaps they were a decade or two ago, they did bring much needed employment to an area that badly needed it. That view is also shared by Alastair Cameron, co-founder of Startacus and a champion of start-ups across Northern Ireland.

“FDI investment can be a great stimulus for economic and employment growth and development. Companies such as Allstate have added to the strength of the jobs market in the North West and can be used as a marketing tool to encourage further FDI investment. The brain drain of talent from Derry has always been associated with lack of well-paid positions and FDI can be an important mechanism for keeping the best talent in the NW. We need more indigenous growth too though – in my opinion, a tech ecosystem can only be strong if there is a mix of both.” 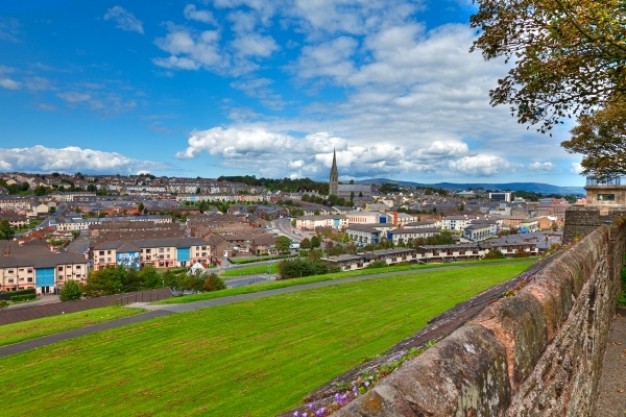 As the ecosystem in Derry matures, there are early signs that the city can be a home for homegrown scaleups with the likes of Kainos and Fintru setting up in recent years. Mary concedes that a lack of high-quality office space may be a limiting factor for further growth, something which may not be so important post pandemic, but what is not in doubt is the level of talent across the region.

“The traditional talent pool has extended from the Bann well into Donegal and in Derry I’ve worked beside people who’ve commuted daily from as far afield as Ballycastle and Creeslough.”

The Sum of All Parts

Over the past couple of decades, Derry’s tech ecosystem has been built on the shoulders of some impressive companies but for it to really thrive in the next decade there are some key ingredients missing.

Alastair from Startacus feels that Derry and the North West is still waiting for the next cohort of breakout homegrown companies.

“Derry has a few stars, but we need strength in depth and also the Derry / NW diaspora to come back to the City to develop those scaling companies. Over time, talent from FDI’s will develop their own tech companies, and the Catalyst Co-Founder programme and other localised programmes to support those early-stage companies will be an important tool and resource for those founders. Derry is full of creative talent and it would be good to see a hub that helps that talent to shine.”

The idea of a hub in Derry is one that Mary would also back, and she is encouraged by news of a new cross-border scaling hub led by Catalyst Inc & LYIT, which will be built in the image of the Portershed Galway model. Mary also feels that the idea of a Derry-Letterkenny-Sligo-Galway Economic Corridor to mirror the Belfast-Dublin corridor is one that needs further development.

“The corridor could have the potential to connect the opportunities that will naturally flow from the new Magee Medical School, to the vibrant MedTech cluster of companies and investors in Galway and to link in with the newly reinvigorated Western Development Commission and the string of Atlantic hubs backed by the Irish Government.”

As economies around the world begin to open up, many organisations and individuals will be evaluating how they can capitalise on new ways of working and doing business. For decades, Belfast has been the beacon for investment, perhaps in part due to strong transport links to London and Dublin. But the pandemic has levelled the playing field. No longer do people need to commute for hours, by plane, train or car to attend a meeting. Derry is as well positioned as any other region across the Island, GB or even continental Europe, to take advantage of new opportunities.

Both Mary and Alastair agree that the last 12 months have fast tracked global opportunities and totally dismiss the thought that businesses in Derry should be competing with counterparts in Belfast or any other region for that matter.

“It’s now genuinely possible to be a global company from Day 1 and utilise talent from any part of the globe.  Barriers no longer exist.  Cities and regions need to think this way too.

To ask Derry to compete only with Belfast would not be setting a big enough challenge.”

Alastair agrees that Belfast is “rightly seen as a leading up-and-coming European tech ecosystem, and Derry needs the infrastructure and backing to grow too.”

“But there is a passion that shines deep in the City and with the City Deal, Ulster University expansion and the likes of Catalyst doubling down on the work they do in the city, it should be expected that the tech ecosystem in Derry grows strongly over the next 5 years too.”

How to convince your boss you need to attend Digital DNA