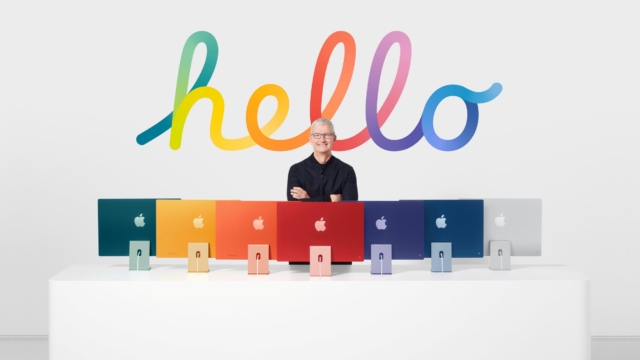 Apple is renowned for their product launch events, they even built a theatre on-campus to host them. The slick on stage presentations, mixed with highly effective marketing videos and the occasional guest appearance are carefully choreographed occasions that Apple aficionados go mad for. Many tech companies that have come after Apple have of course tried to emulate the formula when launching new products or services. But the pandemic has allowed Apple to do something completely different.

The California based company has deployed all of their creative might (and dollars), redefining the product launch playbook. The flashy and highly produced show is an assault on the visual senses. Hollywood style cinematography creates one continuous shot, as we are taken in and out of the spaceship-like campus in Cupertino, California, hearing from product managers and designers telling us about their new creations in pure marketing parlance. The only breakaways are for expertly directed videos, or elaborate product specification sheets.

The “Spring Loaded” event, Apple’s first big launch of 2021, followed the same format as similar events in 2020. The Apple Store goes down, and millions of excited Apple fans tuned in to hear the latest instalment of updates to Apple’s product line.

During the 1-hour broadcast, the company announced several new products, many of which have been expected for some time. There were overhauled iMacs in a range of rainbow colours, a new iPad Pro, alongside a new Apple TV 4K unit, a (random) purple iPhone 12 and the expected AirTags were also released.

On the services front, Apple Card, the company’s credit card available in the US has been upgraded and we also learnt that Apple Podcasts will now include subscription features for creators.

The 1-hour broadcast, streamed live on the Apple website, started with CEO Tim Cook walking in the heavily shrubbed inner sanctum of Apple park. As Tim meandered through the private walkways of the giant HQ, he told viewers of Apple’s environmental credentials declaring all Apple facilities as Carbon Neutral. He quickly segued into an update to Apple Card including family sharing followed by a major redesign to Apple Podcasts which include subscription features for creators and recommendations. Up next was a rather bizarre new purple iPhone that joins the iPhone 12 family. Cook provided no reason for the new colour beyond the fact that it evokes Spring!? With Spring now loaded, it was on to the first major announcement, the much anticipated AirTags.

The Apple AirTags are a direct competitor to the Tile Tag and is an obvious attempt by Apple to open up it’s Find My app with 3rd party developers. Expect to see a whole new category created in the years to come, perhaps even a further development of Apple’s AR ambitions. The AirTags can be attached to anything and will use Apple’s U1 chip with Ultra Wideband technology, creating a potential network of billions of Apple connected devices that cover the globe. The AirTags are expected to retail at £29 each or £99 for 4 and will go on sale on 23rd April. Personalisation options are also available as are the usual high end accessories such as leather luggage tags.

A new iPad was also launched and comes with 5G connectivity and a thunderbolt 4 connector as well as a 12-megapixel camera with a new Centre Stage feature that can dynamically reframe the shot for video calls. It also packs a up to a whooping 2TB storage and 16GB memory along with new M1 silicon which will make this a formidable tablet for power intensive tasks.

The much loved iMac also got a major overhaul, the first since 2012. The new models are reminiscent of macs from the early 2000’s, coming in an array of new colours. Perhaps Cook and co. see these new colour coded models adding more life to mothballed offices from the past 12 months? The new macs have also now transitioned to new Apple M1 chips but still have rear access ports, a long-standing grip with many users. New slim line bezels, a skinny profile and a MagSafe-like connector with an Ethernet connection on the brick are also featured. Apple is also touting a new 6-way speaker system that will provide more accurate sound and will compliment the 1080p webcam from previous models.

The Apple TV 4K upgrade features the A12 Bionic chip, the same that’s in the iPhone and will allow higher HDR frame rates. The remote also gets a redesign and will finally control your TV power.

All in all, the hardware announcements and upgrades were largely expected and it tees up the Autumn event to launch new iPhone and iWatch models. By the traditional Autumn or Fall event, the show may even have returned to the Steve Jobs theatre, just in time for a major announcement and introduction of a completely new hardware category? Apple Glasses integrated with the AirTiles? Or Apple Car? Who knows but by then, Cook et. al may have to step on the stage and get back to the live on-stage product demos.