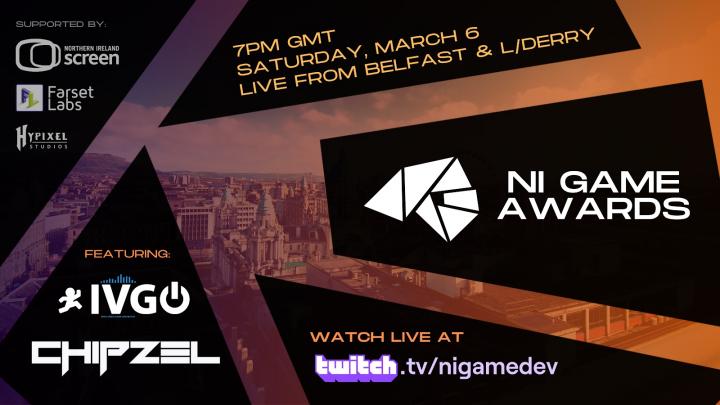 The NI Game Awards will return virtually this year to celebrate 2 years of creativity and excellence in the growing Northern Irish Games Industry, shining a spotlight on some of the individuals and teams making great games here in Northern Ireland.

The event is presented by the NI Game Dev Network with support from Northern Ireland Screen. Usually taking place annually as an in-person ceremony, the awards are taking place online for the first time ever due to the COVID-19 pandemic. The show will be broadcasting live at 7PM Saturday 6th March from Belfast and Derry/Londonderry on Twitch at twitch.tv/nigamedev.

After a round of public nominations, 38 games, studios, and talented people working in the industry have been shortlisted for the awards, with winners being selected by a combination of public votes and by an international panel of experts from across the games industry.

Stuart Neill and Kirsty “Psyche” Mawhinney will be the main hosts for the awards, appearing live from Belfast, where they’ll be joined by some other fantastic guests to announce the winners and introduce some surprises.

Stuart is the host of the How (Not) To Make a Game Podcast, an interview podcast about making games and everything else involved in releasing a game.

Psyche is a full-time variety Twitch streamer from Northern Ireland who previously worked in the games industry for eight years, including as a Project Manager for Riot Games. She now streams and writes full-time.

Joining Stuart and Kirsty will be Johnny Cullen from Derry/Londonderry. He is the founder and Editor-in-Chief of PlayDiaries, and is an award-nominated podcaster and published author.

We’ve teamed up with the Irish Video Game Orchestra (IVGO) to create a medley of soundtracks from video games developed by local studios. Many of these games have received nominations in the NI Games Awards. The video game industry is growing in NI, and this awards event is an opportunity to showcase the variety of talent that exists in the sector.

The IVGO is a Belfast Based Orchestra that has been entertaining audiences since 2015.  During the covid pandemic, rehearsals have moved online, and the orchestra continues to deliver podcasts, practice videos and other content to engage with their audience. To prepare the medley for the NI Games Awards, orchestra conductor Robert Martin engaged with games composer Richard Campbell to compose, arrange, and orchestrate a special performance that will debut during the awards, featuring a full orchestral ensemble.

The creative team-up with the IVGO and the NI Games Awards demonstrates that the video game industry has branches in arts, education and business.  Despite the economic uncertainties caused by Covid and Brexit, this industry continues to grow, and there is a wealth of homegrown talent that can contribute to the success of this sector.

The full list of shortlisted nominees can be viewed here